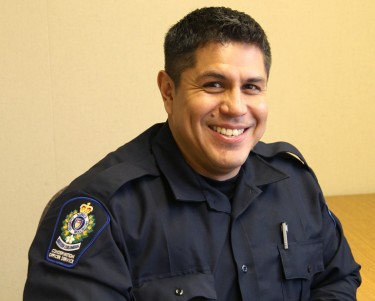 A young Haida man is currently a training recruit at the Western Conservation Law Enforcement Academy in Hinton, Alberta. He will be the first ever Haida to act as a natural resource compliance and enforcement officer on Haida Gwaii.

Buster Bell, 35, was the best candidate, says May Russ, a Hereditary Chief and senior administrator for Council of the Haida Nation (CHN). “There were quite a few applicants but we were impressed that he’d done some RCMP training,” she says. “Hiring him was the next step in the Haida evolution as we work at managing the resources we have.”

Bell will be fully trained to Ministry of the Environment conservation officer service standards with all the associated responsibilities, including responding to complaints and investigating suspected legislative contraventions.

Starting with land, and then moving to marine areas, the team hopes its efforts will result in a more integrated approach to compliance and enforcement for the islands. If things go well, this will also translate into saving money, says Leonard Munt, who is the district manager for FLNRO on Haida Gwaii.

“We’re trying to move from the tops of the mountains to the abyssal sea, even though we’re just learning to walk right now,” he says.

Noting that compliance and enforcement are complicated, Munt explains that one of the challenges the team faces is figuring out the cross-designation of the different jurisdictions. “Our ministry and the Ministry of the Environment have different authorities,” he says.

“One officer might not have the authority to address a particular issue. But if you’ve just spent thousands of dollars to put an officer in the field, you want him or her to be able to address every important issue.”

The same sort of rationale – figuring out how to share – also applies when it comes to equipment and supplies, such as trucks, boats and gas. Combine forces and you get more power. “To buy a boat costs $350,000,” Munt says. “Wouldn’t it be nice if we got all the teams to work together so that we could share all the assets? Then we’d have the right tools to do the right job with the right team.”

Munt notes that this kind of collaborative approach doesn’t work everywhere. It’s effective in this region because the land base is relatively small and because he’s working with just one First Nation with very clear boundaries. “But this is a solution that works well here,” he says.

The importance of this work is reinforced in Haida law. Under the Haida Constitution, the CHN is responsible for ensuring that Haida lands and waters are sustainably managed, continuing the traditional role of Haida watchmen who for thousands of years protected Haida Gwaii.  Bell’s new position will strengthen the Haida capacity to achieve this, alongside ongoing marine monitoring and management activities fulfilled through the Haida Fisheries Program and Haida fisheries guardians.

For May Russ, it’s another step in the Council of the Haida Nation’s mandate to protect the Haida resource-based economy and lifestyle. Living on a small island, she particularly values the bounty of the sea. “It’s the basis of our food,” she says, “Not just the salmon, but also the halibut, the clams and the cockles are so important to our diet and to who we are.”