The Marine Plan Partnership for the North Pacific Coast (MaPP) is a co-led process between 17 First Nations and the Government of the Province of British Columbia that developed and is implementing plans for marine uses on B.C.’s North Pacific Coast, now and into the future. The MaPP initiative is notable also for the diversity of stakeholders involved and the number of marine uses, activities and values addressed.

The MaPP initiative was formalized in November 2011 through a Letter of Intent between the provincial government and First Nations organizations. Four marine plans were signed in April 2015, a regional action framework was completed in May 2016 and plan implementation agreements were announced in August 2016.

Marine planning is happening in many countries around the world. It is the marine equivalent of land-use or urban planning. As our oceans become busier with increasing commercial, industrial and recreational activity, there is a growing need for marine planning to help guide decisions about the use of our oceans.

The MaPP marine plans being implemented will help to create opportunities for sustainable economic development, support the well-being of coastal communities and protect the marine environment.

An ecosystem-based management (EBM) framework provided the foundation for the development of the marine plans. EBM focuses on human well-being, ecological integrity and governance. The framework was informed by local and traditional knowledge and by input and advice from scientists and stakeholder advisory committees. Learn about EBM and the MaPP governance and process.

In the implementation phase, stakeholders will be consulted for input on planned activities, to review report findings, to discuss updates to the plans and other issues of interest.

Members of the public provided input on drafts of the four sub-regional plans in spring 2014. Public opportunities to give feedback on implementation progress will be considered, as needed.

The MaPP initiative released final plans in April 2015.
The Regional Action Framework was completed in May 2016.
Sub-regional Implementation Agreements were announced in August 2016.

Publications about the MaPP planning process

MaPP has published the following articles in the academic journal, Marine Policy:

Implementation priorities for the four sub-regional marine plans and the Regional Action Framework were identified during the planning phase and have been further scoped through implementation work planning and budgeting. The goal is to implement all of the strategies in these documents over time, but the initial focus is on the first five years of implementation. 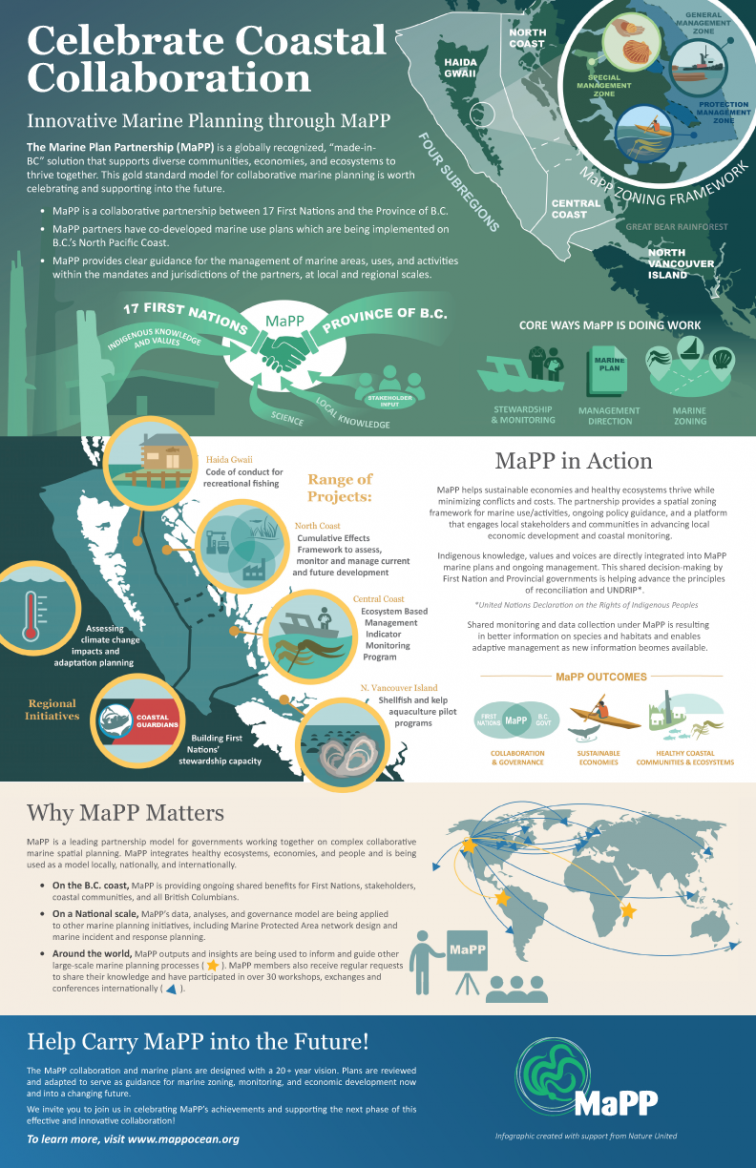