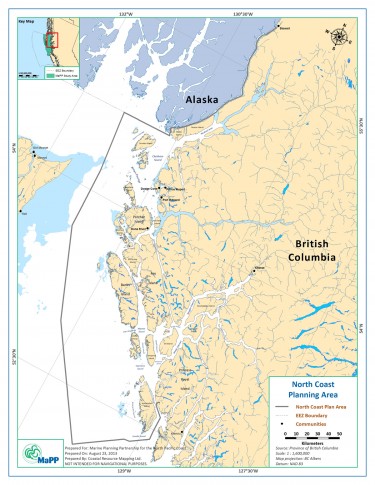 The North Coast Plan area includes an impressive stretch of coastline indented with deep fiords and dotted with thousands of islands. It is a vast, culturally rich region of profound beauty and ecological diversity. The plan area reaches from the southern Alaskan border to the north end of Laredo Sound. Its western edge borders on the Haida Gwaii Plan area.

The North Coast includes a range of complex natural features including important estuaries with distinct marine ecosystems and species. This diversity supports spawning and/or schooling areas for fish, including pelagic species such as salmon, eulachon and herring. The plan area is also important for a variety of seabirds, marine mammals including orca and humpback whales, and other marine flora and fauna.

Prince Rupert, Kitimat and Terrace are the largest communities in the North Coast plan area, which supports an overall population of approximately 42,000. Communities range in size from 13,000 individuals in Prince Rupert, to villages of several hundred, to even smaller settlements. The coastal boundaries of two regional districts lie within the plan area: Kitimat-Stikine and North Coast.

First Nations have managed the territories and resources of the North Coast for millennia, and continue to rely on the bountiful and diverse ecosystems of the coast to sustain their vibrant cultures and economies. First Nations on the North Coast have distinct cultural and spiritual heritages that are intricately linked to the marine environment and the long-standing sustainable use and management of marine resources.

The marine plan area includes the territories of six participating First Nations: Gitga’at, Gitxaala, Kitsumkalum, Kitselas, Haisla, and Metlakatla First Nation who were represented by the North Coast-Skeena First Nations Stewardship Society in this process. The marine plan area also includes areas that are covered by the Nisga’a Treaty, a constitutionally-protected agreement, entered into by the Nisga’a Nation, British Columbia and Canada. Areas subject to the provisions of the Nisga’a Treaty include parts of the Nass Area which includes the Nass Wildlife Area.

A diverse range of economic and community activities occur within the North Coast Plan area. Commercial fisheries, and associated processing facilities, and logging have supported communities along the coast since the early 1900s. These activities continue to be important to the well- being of coastal communities. Other strong economic drivers in the area include recreational fishing, tourism, and port activities in the communities of Prince Rupert, Kitimat and Stewart.