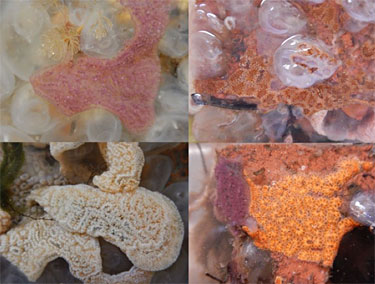 Slimy and brightly coloured, these aliens – otherwise known as Chain tunicate (Botrylloides violaceus) and Star tunicate (Botryllus sclosseri) – spread across docks, boats, gear and the rocky seafloor, smothering seaweeds, barnacles, shellfish and any other species in their path. Because of their ability to overgrow and spread quickly, invasive tunicates are considered a big threat. They can reduce natural biodiversity, damage infrastructure, invade key recreational areas and result in major costs to aquaculture operations.

How the tunicates came to Haida Gwaii is a mystery but the fact remains that these aquatic aliens are here to stay. To identify where these tunicates and other aquatic invasive invertebrate species are, and to work to prevent their spread, a team of alien hunters was assembled which includes staff from the Council of the Haida Nation (CHN) Marine Planning Program, the Smithsonian Environmental Research Center (SERC), Gwaii Haanas and Fisheries and Oceans Canada. In October 2016 this team – Stuart Crawford and Lais Chaves (CHN Marine Planning), Lynn Lee (Gwaii Haanas), Vanessa Hodes and Erika Anderson (Fisheries and Oceans Canada) and Linda McCann and Kristen Larson (SERC) – resumed the annual hunt in Haida Gwaii.*

Hunting for tunicates is a relatively simple affair: flat ceramic squares called “settlement plates” are weighted with chunks of brick and lowered to one meter in depth in the water column. The plates are then collected a few months later and analyzed using microscopes for signs of an alien invasion.

This is the third year that the hunt has taken place. In 2014, the team put out their first sampling plates, which they collected and analyzed in the fall of 2015. This process has been repeated twice with more plates being dropped into Haida Gwaii waters every year. 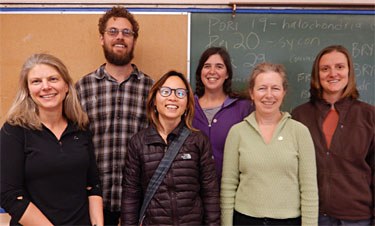 Supported in part by the Marine Plan Partnership (MaPP), in the spring of 2016, CHN staff put out fifty plates in five locations; Gwaii Haanas staff put out an additional forty plates in four locations (see map below). “We wanted to see how far the invaders had spread,” says CHN marine ecosystem-based management (EBM) coordinator Stuart Crawford, “so we looked at several new sites that have never been monitored for invasive species.” This included sites on the Daawuuxusda/Duuguusd west coast, Ḵ’iids Gwaay/Ḵ’iis Gwaayee Langara Island and Moresby Camp.

The results of this year’s hunt were a mixed bag. The new sites were all free of tunicates, which, in the words of Stuart Crawford, “is great news.” However, he also had some bad news to report: “We found the invasive Star tunicate in Port Clements. This invader has been in Masset since before 2007, but did not reach Port Clements until this year.” 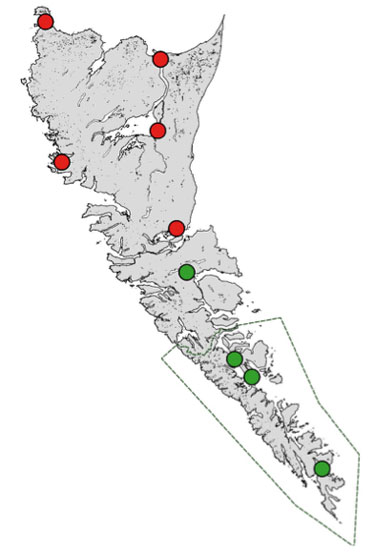 Tunicates in Haida Gwaii are here to stay. However, we can slow or stop the spread of tunicates or other invaders by early detection and intervention through measures such as periodic inspections and hull maintenance of the vessels that may inadvertently transport them from place to place.

*Some opportunistic monitoring for aquatic invasive invertebrates by Fisheries and Oceans Canada also took place in Haida Gwaii in 2007, 2012 and 2013. In 2014 DFO secured funding for a three year monitoring program. This monitoring work was done by a contractor in 2014, but for the subsequent two years monitoring has been a collective effort by DFO, Gwaii Haanas, HOTT and the Smithsonian Institute.