Just imagine – It is a beautiful spring day, and you’re out on your skiff with the family. Crab and prawn traps, coolers, and blankets are loaded. You are looking forward to a meal of crabs later on, but as you cruise towards your favorite spot, you see a row of buoys ahead of you and as you draw closer, you realize that your passage is blocked – you will have to turn back! 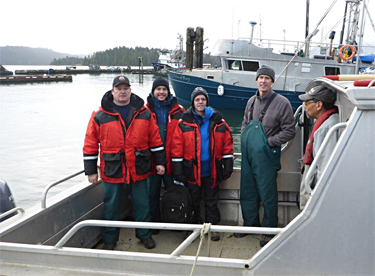 There is significant interest on Haida Gwaii to pursue shellfish aquaculture as part of a diversified marine economy. This interest is captured in the Council of the Haida Nation (CHN)-B.C. Haida Gwaii Marine Plan, which lists shellfish aquaculture as one of five areas available for marine economic development for the islands’ communities. Several inlets have been identified as having good potential for cultivating shellfish, including scallops and oysters, and the seasonal outdoor work associated with shellfish cultivation is well-suited to the islands’ existing labour force.

But like a “choose your own adventure” book, the boating scenario above points to some of the issues that can arise when economic development is pursued without careful consideration of the cultural, social, and ecological activities in an area. To address those concerns a study known as a ‘carrying capacity analysis’ is usually carried out. This type of study focuses on the ability of an area to sustain a particular activity without compromising the natural environment, as well as ensuring that the people who live, work, harvest food, and recreate in the area are not significantly impacted by a type of activity.

‘Capacity’ is measured in different ways, depending on the activity that is being looked at: For example, in 1996 Gwaii Haanas established an annual limit of 33,000 visitor days and nights based on visual impact surveys as well as stakeholder and public consultation. The limit was developed to protect the ecological and cultural heritage of the area and to maintain a “wilderness” experience for Gwaii Haanas visitors.

A ‘capacity’ study for shellfish aquaculture may focus on things like the location of traditional seafood harvesting areas, ocean views from the homes, and the routes of local tourism companies, to name only a few. In turn, a carrying capacity study may also inform management decisions related to the number, location, and size of permitted sites, as well as aesthetic requirements (e.g. the use of black or green floats to maintain views in an area) and direction on the types of species that may be cultivated.

The Marine Plan Partnership contracted shellfish aquaculture specialist Brian Kingzett and Vancouver Island University to develop and apply a methodology to calculate the carrying capacity for shellfish aquaculture development in several key sites in the Haida Gwaii area, including Skidegate Inlet. Mr. Kingzett assembled a cross-Canada team that traveled to Haida Gwaii in January, 2016 for a site visit and meeting with CHN and B.C. technical staff to go over the proposed methodology. The CHN Marine Planning Program and B.C. staff worked with the consultants during the project and the teams are currently finalizing revisions to the report.