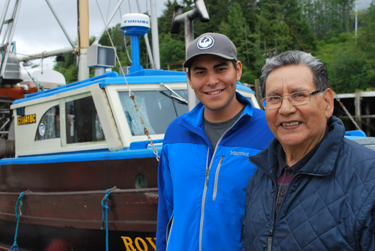 Chief Sm’ooygit Niist’oyx, or “Grandfather Handshake”, is a hereditary chief of the Gitwilgyoots tribe, one of the nine allied tribes of the Coast Tsimshian who live near the lower Skeena River on B.C.’s north coast. His given name is Clarence Nelson. He is a traditional and commercial fisherman, a member of many community committees and a well-read lover of local, First Nations and maritime history. He is also proud to be a mentor of young people who are interested in learning to fish for a living.

Since before contact, Nelson’s people have lived in the region close to what is now known as Prince Rupert. Every summer they travelled to prime fishing and hunting grounds and returned to the village of Metlakatla for the winter. “Metlakatla had its own First Nations name –Tbuunom Galtsap. It means ‘place of plenty’. When you lived there you never ran out of food,” Nelson says.

Today the resources provided by the land and the sea are still very important to the First Nations people of Metlakatla. Nelson says marine planning helps to identify the type and location of the different sea resources and habitats and which ones might require protection. He refers to abalone, which hasn’t been harvested for many years. “My grandchildren haven’t had a taste of abalone. They can only see it in a picture. And if we don’t manage the rest of the resources, that’s what’s going to happen to everything,” he says.

For Nelson marine planning is “… for future generations, my grandchildren, so at least they’ll get an opportunity to eat what I’m eating today.”

Nelson’s grandson, James Russell, recently graduated from Vancouver Island University with a degree in Natural Resource Protection. Now he works with Lax Kw’alaams natural resource department in Port Simpson. His grandfather proudly explains the history of Russell’s First Nations name, Wiihoon, which means ‘plentiful or big fish, abundance’: “He’s from the Nagunaks tribe, the undersea world. He was given the hereditary name because he loves being on the water and fishing all the time.”

It is a challenging and changing time for young people on the North Coast. As new developments bring different opportunities, it’s even more important to remember and protect the traditional way of life.

“We’re trying to find a happy medium where we can take advantage of future opportunities and keep on going with what we’ve been doing for generations,” Russell says.