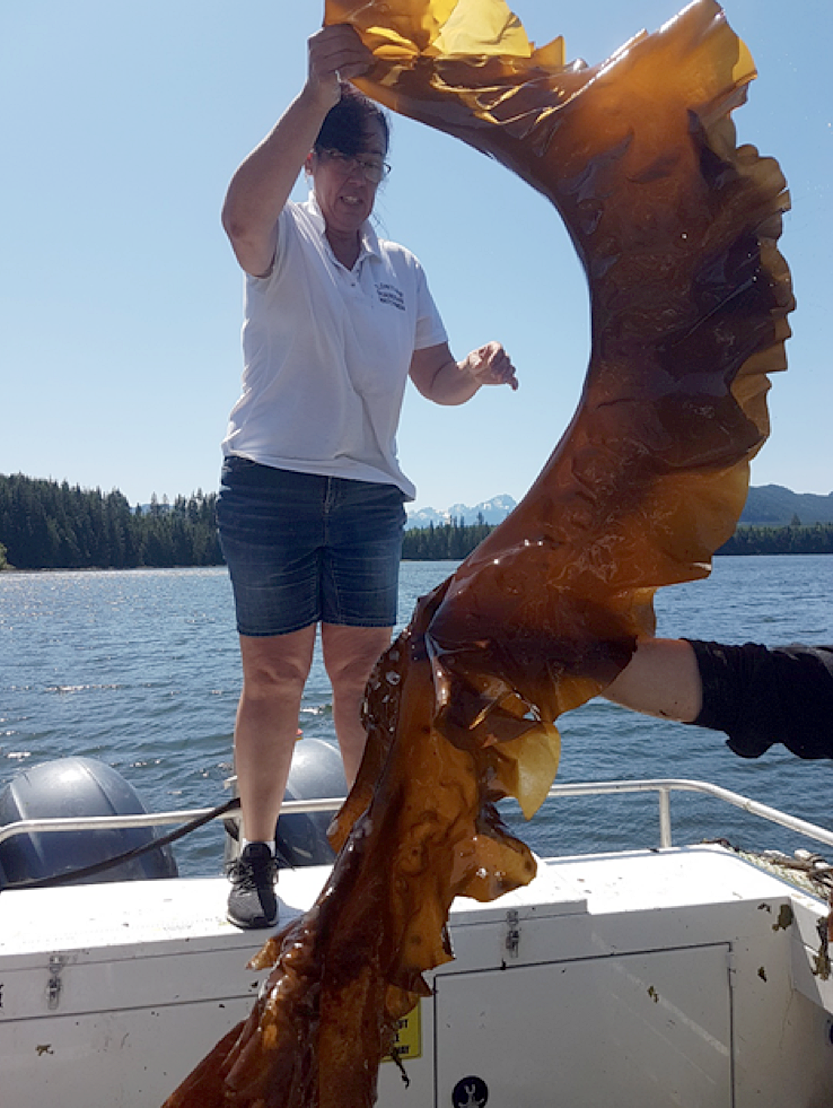 The brown, translucent fronds of sugar kelp that hover below the ocean’s surface throughout coastal B.C. and beyond are gaining interest as an aquaculture product.

MaPP partners in North Vancouver Island ran a pilot study to learn more about ideal growing conditions for the brown algae, which can be eaten and used in fertilizers, biofuels, cosmetics, and pharmaceuticals. Their next step is to determine how big a sugar kelp aquaculture operation would need to be to make a profit, and to review these findings with Nanwakolas Council member First Nations whose traditional territories would be affected and who would need to be consulted on any future aquaculture operations.

“It’s easy to grow,” said Don Tillapaugh, the Marine Plant Pilot (TMPP) project manager. In December 2018, Tillapaugh and a team of researchers wrapped single lengths of rope with twine colonized with sugar kelp spores and suspended those ropes underwater in three coastal sites off northeast Vancouver Island: Port Neville, Clio Channel, and Havannah Channel. The spores looked like brown fuzz on the ropes, and by spring, small kelp fronds were visible, mainly between two and four metres below the sea’s surface at each site. By late May, the fronds had reached their peak weight. The kelp at Port Neville grew about twice as big as fronds grown in the two channel environments, and Tillapaugh said he suspects it’s because the Port Neville waters are more nutrient-dense, fed by nearby mud flats.

“It’s a potential economic driver for some of our coastal First Nations, and something sustainable,” said Gina Thomas, a senior member of the Tlowitsis Guardian program, and a researcher with TMPP. She said commercial farming of the kelp allows greater control over conditions, as opposed to harvesting wild kelp. And, she said she hopes the research will encourage bands in the area to pursue kelp aquaculture. “You don’t need a lot of money or equipment up front,” she said.

Challenges to commercial success, however, exist.

“Growing kelp is like growing cherries,” Tillapaugh said. “It all reaches its peak at the same time and has to be harvested within about one week.”

“It’s a huge risk,” he said, noting the kelp starts to degrade after being picked, and if it’s going to be available throughout the year, it needs to be dried or otherwise processed into a product with a shelf life. “Processing plants don’t exist right now,” he said. Other potential challenges include labour availability in remote locations, transportation, and variability in growth from year to year, he said.

Most concerning, there is no well-defined large market for kelp, Tillapaugh said. While niche markets exist, including high-end restaurants who order small amounts of fresh sugar kelp, Tillipaugh warned, “We need to make sure the market is there before people get into growing it.”

In that vein, the next step for this MaPP project is to research the feasibility of kelp aquaculture, including where it could be sold, in what form, at what price, and what the start-up costs of an operation might be.

In 2016, a MaPP-funded market analysis on shellfish and kelp aquaculture reported some favourable conditions for kelp aquaculture, including that global interest in aquaculture products was steadily growing; and that while several Asian countries are the largest producers and consumers of kelp and other seaweed products, B.C.’s reputation for pristine waters attracts interest in its aquaculture products. The report also suggested that niche marketing techniques, including First Nations branding of kelp products, could bump its selling price.

Although only one company, Canadian Kelp Resources, has been growing and selling kelp in coastal B.C. (since 1982), interest in kelp aquaculture and harvesting has recently surged.

“If you think about future food shortages, kelp may become a beneficial source of sustenance,” Thomas said.

The projected cost of the nine-month TMPP project was $33,000, however, Tillapaugh said the completed project cost less. The Marine Plan Partnership for the North Pacific Coast (MaPP) funded this research after identifying sugar kelp as a new potential sustainable aquaculture opportunity in the North Vancouver Island sub-region. 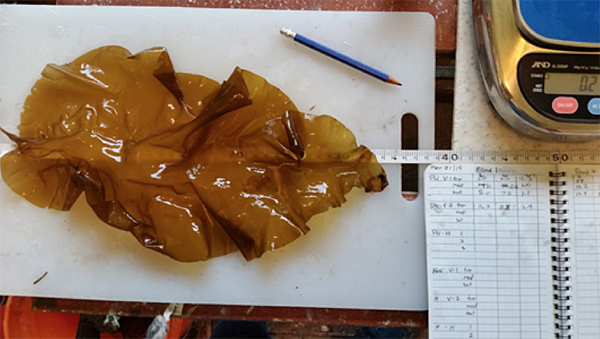