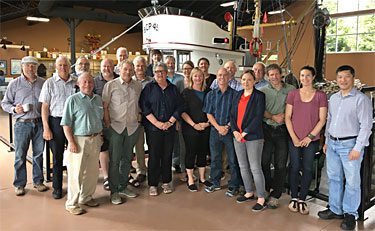 Integral to the MaPP planning process and the current implementation phase, has been the participation of many different individuals, groups and organizations connected in one way or another to the region’s rich marine environment. Otherwise known as stakeholders, this diverse mix of voices added much-valued input and authenticity to the creation of the North Vancouver Island (NVI) Marine Plan. Stakeholder advice and feedback was collected through the NVI Marine Plan Advisory Committee, (MPAC), whose members represented a broad range of marine sectors and interests. Stakeholders continue to make an impact, as seen in three recent MPAC meetings about implementation plans for the NVI sub-region.

There are many interpretations of the term stakeholder, how to meaningfully engage stakeholders and what makes their input so valuable.

Jim Abram, electoral area director for Discovery Islands-Mainland Inlets and local government representative for the Strathcona Regional District, typically views the term stakeholder as “very limiting” as it “usually applies to a specific interest”. However, he believes the input from the NVI marine advisory committee members has played an integral role in shaping the plan by continually bringing forward ideas and views that wouldn’t be known or considered otherwise. “Our local knowledge is invaluable. It is usually accepted, but sometimes not. If it isn’t, a reason is always given. The exchange is respectful and well-discussed.”

Jim McIsaac, coordinator for the B.C. Commercial Fishing Caucus, believes stakeholders diversify the knowledge base that leads to better decision-making and approaches to moving forward. “By having them engaged and bringing their knowledge to decisions, it strengthens all decisions made.” In terms of MaPP, “It creates more durable solutions for communities — creating that space where ecosystems and communities can co-exist, where well-being, economy and culture can co-exist with the environment, productivity and other species.”

Marine coordinator for the Nanwakolas Council and co-chair of the NVI planning team John Bones says stakeholder support has been critical to MaPP’s success. “We’re very pleased at being able to collaboratively develop a plan between the provincial government and our First Nations members. The value of having stakeholders at the table is that it gives everyone the opportunity to understand the plan and issues, and the First Nations perspective. Each First Nations community has different sectors of expertise and knowledge that’s extremely beneficial in making implementation activities relevant and rigorous.”

From a B.C. government perspective, Andy Witt, manager, Coastal and Aquatic Habitat and provincial co-lead for the NVI Marine Plan, agrees. “When you look at the development of a plan and its ultimate purpose, you cannot set a vision or determine objectives without engaging the people who are going to be part of that vision and are integral to implementing your objectives.”

“Having such a diverse group in the same room broadens everyone’s horizons, scopes and thoughts on other issues that are beyond their sectors’ primary focus,” says Barb Dinning, technical planner with MaPP for the NVI sub-region.

Dan Edwards, representative of the Commercial Fishing Caucus, believes that meaningfully engaging a range of viewpoints is essential. “That spectrum ranges from simply asking advice or consultation, to actually sitting down and building a plan together and sharing your experiences and interests and having a consensus framework for decision-making that would ultimately respect those interests.” For Edwards, meaningful engagement offers a critical way to protect his interests and the interests of those he represents.

Rick Snowdon, a local tourism business operator and board member of the North Island Marine Mammal Stewardship Association (a whale-watching industry group), sums everything up. “A stakeholder in a process like this is anyone with a unique point of view on the future needs of the region. ‘Engaging with stakeholders’ really means attempting to capture the diversity of needs and activities and incorporate those needs into a plan that’s inclusive and respectful of everyone.”