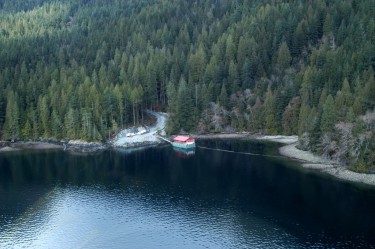 A typical small log dump found today. A protective debris curtain to the right of the float camp is designed to protect the beach habitat. 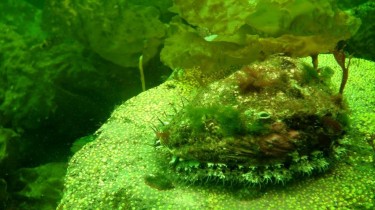 How do First Nations, the forest industry and the provincial government work together to manage logging in the Central Coast? And, just as importantly, how do they protect the environment while they’re doing it?

In response, Warren Warttig quotes a university professor: “Forestry isn’t rocket science – it’s much harder than that,” he notes. Warttig is the senior planning biologist with the forest company Interfor, and a member of the Central Coast Marine Plan Advisory Committee. The challenges surrounding forestry are particularly critical in the Central Coast Region, he says, where about 50 per cent of the land is either park or protected and an additional 35 per cent of the productive forest land-base is constrained by some form of protective legislation.

In the old days, when understanding of how to protect the environment was less acute, forest companies typically dumped their logs into well-developed estuaries. “We now recognize those areas as some of the worst places to put log dumps,” Warttig says.

Now there is a ‘no-net-loss-of-habitat’ policy in place, established by the federal department of Fisheries and Oceans (DFO). When forest companies have an impact on habitat they are required to replace it with a compensation habitat. “We’d find an area and build a rock reef which, if done right, can produce some pretty nice habitat – particularly for abalone and rock fish,” Warttig says. Visual impact is a whole additional matter, addressed through forest legislation. Forest companies now have software allowing them to accurately model what an area will look like after logging.

Interfor already has a protocol agreement with the Wuikinuxv First Nation and is currently working on one with the Heiltsuk. Protocol agreements formalize the relationship between industry and First Nations and clarify information sharing, management best practices, and consultation requirements. They may also include employment and economic components. “It’s important to us that we have these agreements,” Warttig says. “We’re aware that we’re operating in the traditional territories of the First Nations and we want to be thought of as a good neighbour.”

From the Heiltsuk point of view, the forest industry has been pretty good in recent years, according to Heiltsuk stewardship director Kelly Brown. “They’ve responded well to having First Nations staff members on their team and we’re working our way to becoming more involved in activities in our territories.”

Six different forestry companies operate in the Heiltsuk territory and the First Nation hopes to make formal agreements with all of them. “We have a fairly vigorous checklist of requirements from industry and the province that we set out in the agreement itself,” Brown says.

“Industry has responded quite positively in moving their projected cut-block areas so they wouldn’t affect Heiltsuk or salmon,” Brown says.  “Everything is moving in the right direction and we expect to have agreements in principle very soon.”

The Heiltsuk are also applying for some buffers around old village sites and, in general, they hope to minimize the amount of lumber that’s being taken. “The review’s going on right now,” Brown says. “There are always pros and cons to taking timber,” he says. “We don’t want cutting for the sake of cutting.”

Heilsuk marine planner Julie Carpenter agrees. “We’ve been working with the province and the forest industry through the MaPP process to identify areas of interest for protection,” she says. “We’ve talked quite a bit about cumulative impact of different logging sites and we’re trying to work with the logging companies to limit those impacts.”