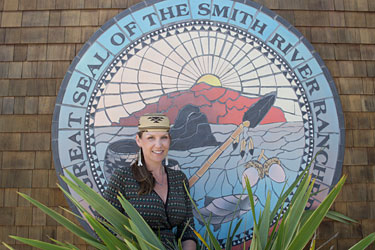 People create borders but oceans flow right through them. So when it comes to marine planning, it seems natural to cross borders to share ideas, knowledge and goals.

In June 2014, five members of the Smith River Rancheria Tribe of Tolowa Dee-ni’ from California/Oregon visited the Nanwakolas Council of North Vancouver Island to learn about the Nanwakolas approach to marine planning with its MaPP partners. The Tribe is spearheading collaborative tribal marine planning on the U.S. Pacific coast.

Since 2010, the Nanwakolas Council has travelled south to make two presentations: one at the indigenous ocean science forum, hosted by the Tribe, and one at an event hosted by Point 97, an Ecotrust company. Then last month, the Tribe’s delegation traveled north to gather information to share with coastal tribes in Washington, Oregon and California. Ultimately, the Tribe hopes to facilitate the establishment of a West Coast Tribal Regional Ocean Partnership that would explore ways to approach marine planning, develop policy and participate in the implementation of the planning work.

“We’re at the very beginning stages of trying to figure out how do we communicate across state lines,” said Briannon Fraley, self-governance director for the Smith River Rancheria, Tolowa Dee-ni’.

The Tribe’s territory straddles the California/Oregon state line, one-third/two thirds respectively. Nearly 100 miles of coastline connect the two. This means the Tribe communicates with two state governments as well as the federal government.

Nanwakolas means “a place we go to find agreement.” And with many years of land and marine planning experience, Dallas Smith, president of the Nanwakolas Council, has much to share about working to find agreement – both among collective First Nations and in government-to-government relationships.

“I keep hearing, that the provincial government and the First Nations have a really good working relationship,” said Fraley. “And so that is going to be one difference for us and we need to figure out a way to communicate and collaborate better.”

What advice did Nanwakolas have to offer? “We advised them to build a strong government-to-government relationship that exists at three levels: technical, bureaucratic and political,” said Smith. “And the other piece is patience. You know, someone picks an arbitrary timeframe, like planning should take two years. Planning takes what it takes because you need the community buy-in, so you have to have that patience for your community to engage so you can build those robust grassroots community plans.”