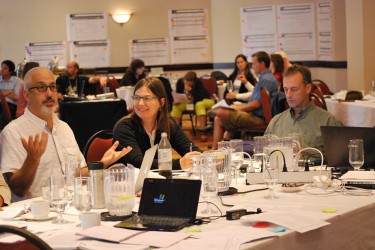 What does your doctor do if you show up in his or her office complaining of a pain on the left side of your chest? Take your blood pressure? Check out your cholesterol?

In fact, today’s health practitioners are starting to do a lot more than that. They might ask you about your eating habits (too much unhealthy fast food?), your stress levels, and what you’re doing for exercise.

Just as our society has started to adopt a more holistic view of health, we’ve also realized that it might help us to look at other aspects of our lives through a variety of lenses.

That, at least, is the premise of ecosystem-based management, or EBM, the type of approach that’s been adopted by the MaPP initiative. “You can’t look at things in a single box,” says Andrew Day, a natural resource expert and consultant who has been contracted by the MaPP initiative to develop an integrated suite of human well-being and ecological indicators.

“Just one lens is not enough,” he says. “The idea behind EBM is to start looking at things from many different lenses to get a better picture of what’s happening in the system.”

When considering a particular agency’s viewpoint, for example, Day knows it’s just as important to consider the perspectives of First Nations, businesses, scientists, non-profit groups, and the public. Day says all these views are valuable and by acknowledging and respecting them it’s possible to get a better understanding of what’s happening in the system.

It also helps to understand how human well-being indicators (social, economic, cultural, and technological) are interconnected with ecological well-being indicators such as species and habitats. “One of the big questions is understanding how things relate to each other and the consequences of different decisions and actions,” Day says.

As a trained lawyer with a PhD in natural resource management, Day says it’s his job to draw on the expertise of others and then boil down or integrate their knowledge. “I travelled and worked in Africa for almost five years and became involved in community development,” he says. “When I came back to the coast, I connected with a number of First Nations chiefs, mayors, fishermen, agencies, and businesses who could see they needed to start working together and managing things more holistically. They started with the principles of interconnection and respect.”

Day says that one of the keys to success in the 21st century will be understanding interdependence and “trying to understand and respect the ways in which what you do over here, is going to affect what you get over there.” He recognizes this is difficult to do, in part because it is not the way systems, operations, and thinking occurred during the industrial revolution.

But that is changing now.  As an example of one area that’s taken big strides in trying to build partnerships and move towards a more ecosystem approach, he cites the Puget Sound Partnership. Inspired by a governor and many leaders who were determined to make the area healthier, the region developed some ambitious goals and indicator tracking. You can see them at the Puget Sound Vital Signs website. “It’s presented in a way that everyone can understand,” Day says. “It’s not just scientific reports – it’s much more accessible.”

In B.C., the MaPP initiative has hired Day to recommend indicators and options for monitoring the marine area. His team has reviewed indicators from other parts of the world, conducted surveys of more than 200 ecological experts, and facilitated several workshops with businesses, governments, scientists, managers and First Nations.

They have reduced more than 1,000 potential indicators to a suite of about 50.  Team members are now working on guide sheets for the recommended indicators and looking at different monitoring programs and partnerships.

“Canada’s coasts are globally significant and unique, with high ecological values and incredible economic potential,” he says. “It’s important to manage them properly or they could become degraded like so many other coastal areas in the world.”