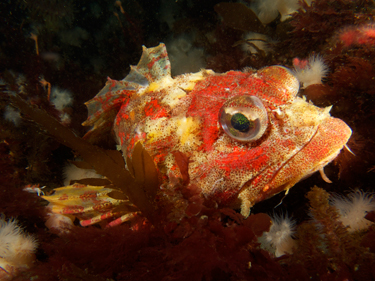 A rock wall in the waters off the Northern tip of Vancouver Island is world famous – at least to a select group of people in dry suits. Scuba divers come from all over the world to dive the wall at Browning Pass and other remarkable sites near Port Hardy.

Browning wall is a sheer rock face, about a block long that starts some 30 metres above the water line and plunges steeply to a boulder-strewn sea floor at about 40 metres deep. It is densely populated and teeming with marine life. “You could spend 50 minutes underwater just looking at one metre square,” diving enthusiast Gary Marcuse says. “The more you look, the more you realize there are layers of plants and animals and tiny little fish.”

Scuba Diving Magazine Divers’ Choice Awards has consistently ranked British Columbia as a top diving destination in North America. “The more I was diving elsewhere in the world, the more I realized that right in our back yard, in the Queen Charlotte Sound area, we have this extraordinary collection of mini ecosystems,“ Marcuse says.

Back in October 2012, Marcuse was overnighting in a hotel in Port Hardy before catching a boat to a dive location. He was lured into a meeting room by a plate of cookies and walls covered by maps. He had happened upon the first open house for the MaPP North Vancouver Island sub-region.

In addition to being an avid recreational diver, Marcuse is a documentary film and television producer. However, it was his master’s degree in regional environmental planning that drew him to the marine planning maps and he quickly said, “Where are the dive sites?”

That question eventually led him and Paul Sim of the Underwater Council of BC (UCBC) to Alan Thomson and Nick Heath, the public recreation representatives on the North Vancouver Island (NVI) Marine Plan Advisory Committee. 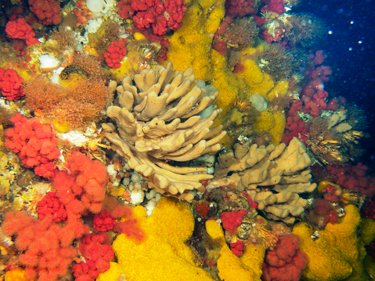 Thomson saw that Marcuse offered both a planning background and connections to the diving community through UCBC, a non-profit society that provides a voice for B.C. recreational divers and promotes safe scuba diving and environmental protection. Using advisory committee support funds, Thomson arranged a modest consulting fee for Marcuse to develop a report that identified more than 120 dive sites in the NVI sub-region and more in the Haida Gwaii sub-region. In addition, other divers contributed stunning video and photographs.

Marcuse recorded his dive site information in the BC Marine Conservation Analysis (BCMCA) database, which more than doubled the dive sites included in the database at that time. The BCMCA is one of many data sources for the MaPP marine planning portal, a sophisticated planning tool that allows users to look at many different data layers together to learn more about the MaPP study area.

Thomson says that without the report from Marcuse and the UCBC, there would be less information about diving in the NVI Draft Marine Plan. “So I think their report added depth and scope to the draft marine plan and also added information to databases such as the BCMCA.” He adds, “Mustering the facts and providing them in their report can only help to put recreational diving on the map and inform decision-makers about the possible consequences of choosing one course over another.”

“I like to think of divers as explorers in the marine ecosystems,” Marcuse says. “Divers are putting red flags on the map wherever they discover vital and abundant life.”