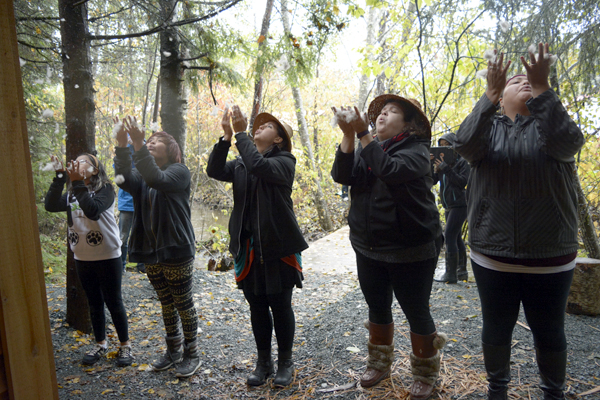 Two students and three staff from ‘Na Aksa Gyilak’yoo School blow eagle down to bless a new smokehouse. The smokehouse is used to preserve food such as eulachon, a traditionally important fish. In the background, two media arts students record the event, and a once-dry creek bed teems with water.

In the midst of cultural revitalization program for First Nations students near Terrace, B.C., a dry, trash-ridden creek bed was transformed into a stream of fresh mountain run-off. As part of the program funded in part by the Marine Plan Partnership (MaPP), students from ‘Na Aksa Gyilak’yoo School in Kitsumkalum, B.C., cleared garbage from the creek bed next to their school and led a traditional blessing of a nearby new smokehouse.

Immediately following the blessing, a surge of water came down from the mountains, recalled school principal Colleen Austin. She said water filled the creek that empties into the Skeena River, one of B.C.’s major salmon migration routes.

“It wasn’t even a trickle” said Austin. “It was an absolutely incredible rush of water.”

There had never been significant water in ‘Na Aksa Gyilak’yoo Creek in the 14 years she’s been at the school, Austin said. People used to hang out in the forest next to it, she said, and the rocky bed was strewn with litter.

“We believe, and we’ve always maintained, that when we respect the land, the water, the air, the trees, and everything around us, that we will be blessed,” said Austin, when asked how she explained the creek’s revival. Austin, whose Tsimshian name is ‘Wii Goot, which means Big Heart, said the creek continued to run with water for several months, and despite being dry in October 2018, she believes the creek is likely to run again, and one day may be viable enough for salmon to spawn up it, as they traditionally did before the area became polluted.

Sixty students from the school, ranging from kindergartners to Grade 12, participated in the Youth Cultural Revitalization Program, a $10,000 project funded by MaPP. The students’ backgrounds included Tsimshian, Nisga’a, Haida, and several other First Nations ancestries. The program was divided into four seasonal units, and included lessons on environmental stewardship and Sm’algyax, a critically endangered Tsimshian language. The school’s language co-ordinator, Mique’l Dangeli, who is fluent in Sm’algyax, led the programming, with others, including Nisga’a elder Larry Derrick, and John Blumhagen, a Tsimshian education assistant at the school.

The first unit of study in the summer of 2017 focused on salmon, including the decline of local species with environmental changes, how to ensure the return of salmon, as well as its cultural significance. Students fished for salmon on the Skeena River, and cleaned, filleted, and jarred the fish.

The second unit of study, in October 2017, was centred on the school’s recently built smokehouse, where food is traditionally preserved. The students cleared debris from the woods around the smokehouse and from the adjacent then-dry creek bed. They learned how to lead a blessing of the smokehouse, including with singing, dancing, and traditional uses of cedar branches, eagle down, and fire. About 90 members of the school’s larger community, including parents, grandparents, teachers, and local residents joined the event.

“It was pouring rain the day before and up until the blessing. The rain completely stopped and the sun was shining for actual blessing. Then it poured again afterwards,” Austin said, laughing. When the water began rushing over the rocks that day, the adults in attendance were all in shock and disbelief, Austin said, adding some are still in disbelief. “And obviously we were thrilled.”

The third unit, in January and February of 2018, focused on Tsimshian and Nisga’a astronomy, including reading the relationship between ocean tides and the position of the moon to predict a season’s bounty.

And, in March of 2018, students dip-netted in the Skeena River for eulachon, oily smelt that are about the length of one’s hand and traditionally vital to coastal First Nations. Eulachon populations have declined coast-wide, and are listed as a species of ‘special concern’. While the students were not successful catching them, they received some as a gift and learned how to smoke the fish in the school’s smokehouse.

“The students loved being part of this project,” Austin said, noting that it helped build mentorship between students of different ages, build skills, and it connected students to their elders. She said students who may have run ATVs over the forest or thrown litter on the ground, are now working with elders to pick tea and berries, clean fish, and properly dispose of fish remains.

“They wanted more,” Austin said of the students in the program, who comprised most of the student body of ‘Na Aksa Gyilak’yoo School.