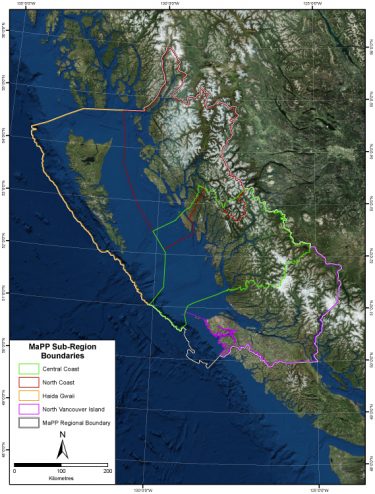 The white-bordered area in this satellite image shows the B.C. coastal region addressed by the Regional Action Framework (RAF). Each of the four sub-regions, whose locally-developed marine plans were used to create the RAF, are shown within the RAF boundary.

The Regional Action Framework (RAF) is the result of intensive consultation and planning for marine areas along the North Pacific Coast of B.C., from Campbell River through to the Alaskan border. Its broad view prioritizes both ecosystem and human well-being, as well as collaborative and efficient marine management.

With a 20-year scope, implementation of the RAF is now underway.

The Marine Plan Partnership (MaPP) plan area is comprised of four sub-regions: Haida Gwaii, the North Coast, the Central Coast and North Vancouver Island. As each sub-region has its own unique set of marine environments, local values, governance mechanisms, and socio-economic contexts, the MaPP partners agreed in 2011 that each sub-region would develop its own goals for marine management, in consultation with local stakeholders.

Knowing there would be some overlap among all sub-regional priorities, MaPP partners agreed in the same year to also create a framework that considers the entire region, looking at broad ecosystem issues as a whole.

The result is the RAF, completed in May 2016. It identifies common elements from all four sub-regional marine plans, and supports the sub-regions to work together in addressing common goals. This collaboration on the actions identified in the RAF will benefit the region as a whole, saving time and money. Over the 20-year implementation period the RAF aims to improve both coastal community and ocean health.

Implementation of some shared priorities is already well-underway.

“For example, MaPP technicians and community members from all sub-regions identified that monitoring eelgrass abundance and distribution was important, so that will likely become one of our regional indicators,” said Romney McPhie, the regional projects coordinator for MaPP, who helps coordinate MaPP partners across the sub-regions. “Observing these trends in eelgrass beds over time will help MaPP partners assess how their actions on other priorities may be impacting eelgrass”, McPhie noted.

Ecosystem-based management underlies the RAF, where both ecological and human well-being are considered as components of an entire system. It’s an adaptive approach, and in keeping with that, evaluations and adjustments will be made to the RAF every five years.

Planning undertaken by MaPP partners, including creation of the RAF, has demonstrated an unprecedented level of collaboration in marine management for B.C.’s coast. The provincial government and 18 First Nations partnered during the planning phase, and collaboration between the Province and First Nations continues throughout implementation. Traditional knowledge and values of partner First Nations were an integral part of developing the RAF, along with provincial government priorities, and local community values.

The RAF also received input from an advisory committee of marine-based stakeholders, including industry representatives, conservationists, recreationalists, and elected local officials, as well as from a science advisory committee.

Through the RAF and sub-regional plans, MaPP partners aim to improve coastal ocean health, increase employment in local communities and diversify jobs, and give proponents more certainty concerning their investments in the coastal zone. Over the long-term, the RAF will enable a broader understanding of how the ocean works and ensure all those concerned have a deeper understanding of how to manage the North Pacific Coast of B.C. more holistically and efficiently.