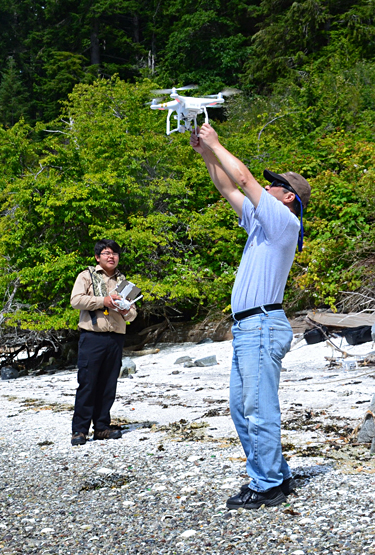 At the Tlowitsis Nation village site on Turnour Island, Guardians in training explore how drones can be used for conservation monitoring. The opportunities and challenges associated with these programs were the focus of a recently completed study—one of three that were commissioned as part of MaPP implementation in North Vancouver Island. Photo credit: Scott Harris.

“These studies show that we’re serious about implementing this plan, and that there are economic opportunities for everyone here—even in stewardship,” says John Bones. As marine coordinator for the Nanwakolas Council, he helped design the scopes of work for the reports, which were completed as part of MaPP implementation in this sub-region.

One report explores opportunities for development of key sectors: coastal forestry, seafood processing and marketing, research and monitoring, marine-based renewable energy, aquaculture and tourism. It suggests actions to advance them and ranks these by potential impact, approximate cost and time frame.

Tourism is seen as especially promising. Low-cost actions with potentially high impact include greater cooperation between MaPP partners and Vancouver Island North Tourism, development of aboriginal and cultural tourism, and better promotion to international markets of the sub-region as a whole.

Shellfish aquaculture is the focus of a second report. It analyzes biophysical capabilities of 22 areas that the NVI Marine Plan zones for Special Management–Cultural/Economic Emphasis, using extensive datasets from government and salmon farms in the region. It also considers factors like nearness to services and labour, and likelihood of local acceptance.

The result? “Shellfish aquaculture could supply some local markets, but large-scale commercial aquaculture of Pacific oysters or Manila clams probably won’t fly in North Vancouver Island,” says Bones, citing the key obstacle: frigid waters. “But it does suggest potential for aquaculture of blue mussels, and kelp for huge Asian markets.”

A third report investigates opportunities to power up the five guardian programs that make up the sub-region’s Ha-ma-yas Stewardship Network. They and their counterparts in other MaPP sub-regions engage First Nations in activities that support conservation and resource management.

The report lauds the “significant progress” of Ha-ma-yas and recommends partnerships with relevant B.C. government agencies. For example, guardian watchmen could conduct joint patrols with conservation officers and park rangers. Opportunities for collaboration could be explored by B.C. Parks, the B.C. Ministry of Forests, Lands, and Natural Resource Operations’ archaeological branch, and Nanwakolas member nations that have conservancy agreements and marine protected areas.

Andy Witt, the B.C. government MaPP co-lead for NVI, sees scope for the Guardian Program to support implementation of the NVI Marine Plan. “To capitalize on the opportunities identified in the report, the key challenges for the MaPP partners to address are issues associated with liability, personal safety, and provincial jurisdictional limitations in the marine environment,” says Witt.

In fact, all provincial interviewees viewed collaboration with guardian watchmen positively in the areas of ecological monitoring; compliance promotion through presence on the water to “observe, record and report”; and provision of data to support enforcement activities. They stressed the importance of building trust and relationships through joint actions as a starting point.

Bones is hopeful about possibilities. “We really appreciated that B.C. government tenuring agencies were so supportive of this study and so forthcoming with the researchers, and that B.C. Parks seems quite open to exploring a bigger role for guardian watchmen,” he says.

The three reports were shared at a MaPP implementation advisory committee meeting in October 2016.