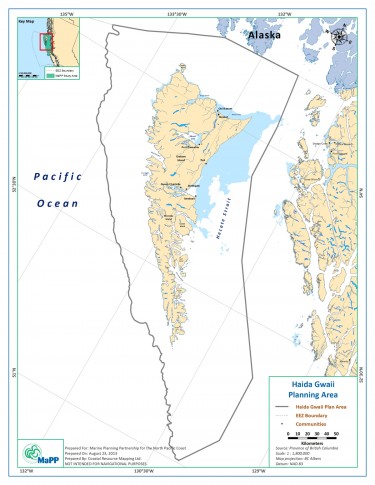 Haida Gwaii is an archipelago of approximately 150 islands located 100 kilometers west of the north coast of British Columbia. Xaadaa Gwaay, Xaaydaga Gwaay.yaay, or Haida Gwaii means “Islands of the People.” The chain of islands extends roughly 250 kilometres from its southern tip to northernmost point. It is surrounded by several large bodies of water – Hecate Strait separates Haida Gwaii from the mainland, and the islands are bound by Dixon Entrance to the north, Queen Charlotte Sound to the south and the open Pacific Ocean to the west.

Haida Gwaii Yahguudang – respecting Haida Gwaii – means respect for the past, present and future. Haida Gwaii has been home to the Haida people for thousands of years and will continue to be for generations to come. Haida culture is closely connected physically, spiritually and economically to the surrounding ocean. Each generation passes inherited and experiential knowledge of fishing grounds and harvesting methods to nieces, nephews, children and grandchildren. This intimate relationship with the marine environment is reflected in Haida traditional knowledge, a living body of knowledge that is built upon past and current Haida experiences throughout the archipelago.

This rich marine environment supports a population on Haida Gwaii of about 4,400 people, approximately half of whom are of Haida ancestry. Seven main communities are located on the islands: Old Massett, Masset, Port Clements, Tlell, Skidegate, Queen Charlotte, and Sandspit. Examples of marine employment in the region include commercial fishing, fish processing, tourism (including both ecotourism and recreational fishing charters), marine transportation and research and monitoring.

Human well-being – including cultural, economic and social values – is an integral part of marine use planning. Together, ecological and human values define livelihoods, provide sustenance and inspire art and culture on Haida Gwaii.