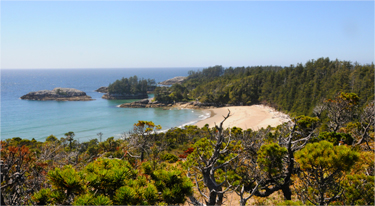 We know a lot about forests and the important role they play in our environment and our economy. But what do we know about underwater forests – the nutrient-rich kelp forests found along the North Pacific Coast?

Applied marine ecologist Anne Salomon, who studies kelp forests, calls them one of the most productive ecosystems on our planet. They provide habitat for rockfish, abalone, sea urchins and many more marine species. Kelp forests are also a source of food that fuels marine food webs and they help to calm the waters on wave-exposed outer shores, providing a safe haven or nursery for tiny larvae, fish and shellfish.

“They also sequester carbon dioxide, so they’re carbon sinks,” Salomon says. “That’s a pretty important service these days given that we have too much carbon in our atmosphere.”

Salomon is an assistant professor at Simon Fraser University in the School of Resource and Environmental Management and a member of the MaPP Central Coast Marine Plan Advisory Committee. She is also one of the principal investigators of the Hakai Network for Coastal People, Ecosystems and Management. Housed at SFU, it is a network of Canadian and international scientists that works with the Hakai Beach Institute on Calvert Island off the central coast of British Columbia.

Hakai and its funding body, the Tula Foundation, are the brainchildren of Eric Peterson and his wife, Christina Munck. A fourth generation British Columbian, Peterson is an early-stage entrepreneur who thinks long-term. He is a geneticist and molecular biologist who is used to examining things in detail. He is a former McGill University professor who worked in B.C.’s coastal resource industries in his student years. He is also a successful tech entrepreneur who sold his commercial interests to establish the Tula Foundation.

The Tula Foundation finances and runs the Hakai Program, a set of interlocking initiatives in ecological research and education that concentrate on coastal margins and the watersheds and estuaries that feed them. The Hakai Program focuses on long-term ecological research, which Peterson describes as, “Choose a region, study it long-term, study it year round, and study lots of factors and their interaction.”

Peterson’s commitment to long-term research is valued by scientists who often are funded for shorter time spans. “It’s a huge amount of foresight to provide long-term funding because you can only detect change with long-term monitoring … we need data that go through time,” Salomon says.

She adds that the type of data collection that Peterson helps to fund through the Hakai Beach Institute over time will assist scientists in assessing the effects of initiatives such as MaPP.

Recently, Salomon and a number of other scientists launched the Outer Shores Research Program. Funded by the Tula Foundation, the program works in collaboration with the Hakai Beach Institute and Central Coast First Nations, including the Heiltsuk and the Wuikinuxv. “The whole idea of the Outer Shores Research Program is to understand the major drivers of changes and their effects on near shore coastal ecosystems (including kelp forests and eel grass meadows) that people rely on – for sustenance, for cultural values, for economies,” Salomon explains.

Equally important to Salomon’s scientific research is the knowledge she and her colleagues gain from what she calls “deep time” or prehistory. “There is very clear evidence of prehistoric use and management for these resources. So I think we have a lot to learn from coastal First Nations.” For instance, Salomon’s lab work has recently shown that ancient First Nations clam gardens can almost double clam production compared to uncultivated non-walled clam beaches.  “Indigenous people in the past didn’t increase their footprint,” she says, “They made their footprint more productive.”

Michael Reid is the aquatics manager for the Heiltsuk Integrated Resource Management Department. For more than a decade he has looked for solutions to challenging marine issues on the Central Coast. “Eric Peterson and Christina Munck not only provide funding, they provide the opportunity to bring all of us together,” he says. “They have brought a lot of brilliant minds together in trying to answer some of the bigger questions. And you know, it’s worked really well.”

See the rugged coast of Calvert Island from helicopter.

Hakai – The Rugged Coast from Grant Callegari on Vimeo.