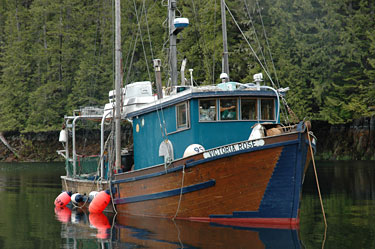 “We’re definitely not bored.” That’s an understatement from Lynn Lee and her partner in life and work, Leandre Vigneault.

The two marine biologists, scuba divers and parents of a 12-year old boy, own and operate Marine Toad Enterprises Inc., a biological consulting company in business on Haida Gwaii for the past 18 years.  One or both of them spend up to 100 days a year on the Victoria Rose, an ex-West Coast troller. Often working on separate contracts, they provide a wide variety of services from looking for herring spawn and counting salmon to assessing the impact of log dumps. Their clients include the Haida Nation, Fisheries and Oceans Canada and forestry companies. They also run Salt Spray Explorers, a small sport-fishing company that offers ocean-fishing and wilderness-exploration adventures. 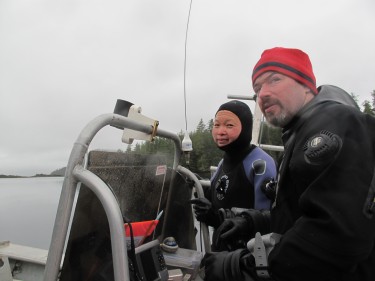 Vigneault, 43, has lived on Haida Gwaii all his life. He was born to a Montreal father and Toronto mother who came to Haida Gwaii to pursue a love of fishing, not knowing he was on the way. He spent the first 10 years of his life on a tiny island in the Masset Inlet, 14 nautical miles from the nearest road. “So, I’ve had a lot of time around water,” he said.

Lee, who is also 43, came to Haida Gwaii in 1993 after completing her undergraduate biology degree. She is now working on a PhD focused on kelp forest ecology and the interactions between people, sea otters and abalone.

Over the past decade, Lee and Vigneault also have found time to participate in four land or marine planning processes.  They both sit on the Haida Gwaii Marine Advisory Committee (MAC). Lee brings academic research and marine conservation expertise to the Haida Gwaii marine planning process and Vigneault brings the perspective of a local, independent sports-fishing operator with a conservation ethic.

Lee explained that Haida Gwaii MAC membership includes people with diverse interests and concerns. “But we were also able to work together really well,” said Lee. “Even though our opinions may be completely at odds, people were still really respectful with each other at the table. And so it made for interesting discussions and a way to look at things in a different way.” 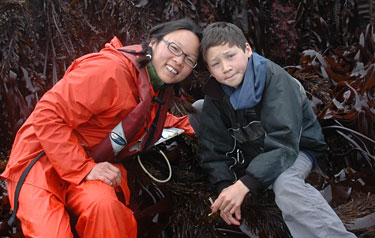 Lee and son take a break from an abalone survey

Vigneault acknowledged that there were tough discussions, especially around provincial marine protected areas, but people worked to find solutions. “There were times at the table where suggestions were made by various interests that small modifications in the locations of things could potentially result in similar success with a little less hardship,” he said. “And I think the table as a whole was pretty respectful of trying to accommodate those.”

Why would two people invest 10 years of their lives in long, difficult planning processes? “The reason we do all this is because we really care about Haida Gwaii,” said Lee. “We also live off the land and the sea. We go hunting and fishing and most of our food is gathered locally. So that’s a really important part of the lifestyle of being here. And that’s part of what drives us to be so concerned about the long-term health of the place.”