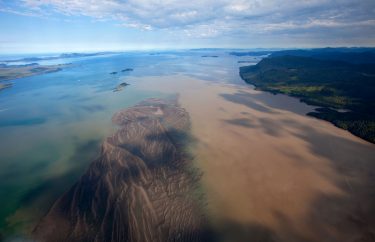 Originating high in the coastal mountains of northwestern British Columbia, the Skeena is the second largest river in the province and one of the world’s longest undammed waterways. It winds 610 kilometres from its headwaters to its rich estuary near Prince Rupert.

The mouth of the Skeena is a world onto itself. Unlike most estuaries, the Skeena does not have a single distinct intertidal delta. Instead, sediments from the river are deposited in shoals along the lower river and channels that connect the estuary to the open ocean. The result: a region of extensive mudflats and shallow intertidal passages. Here, eelgrass beds and kelp forests so vital to the health of other species flourish. The area supports some of the largest fish populations on the coast and it is a critical waterfowl habitat. All Skeena salmon spend part of their life in the estuary and depend on its health as juveniles and as returning adults. The Skeena Mouth is important to the region’s First Nations and includes ancient village sites, harvesting areas and sacred places. With its natural beauty and abundant wildlife, it is also a great spot for ecotourism. 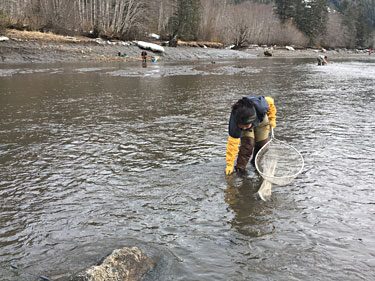 To help protect this “super habitat,” the Province of British Columbia and First Nations in the North Coast plan area, represented by the North Coast-Skeena First Nations Stewardship Society (NCSFNSS), identified the mouth of the Skeena River as a protection management zone (PMZ). Land use decisions consistent with the recommendations in the North Coast Marine Plan will help ensure the sustainability of this unusually productive and complex ecosystem that is so important for a number of culturally, recreationally and economically important marine species.

One such species in particular has an important role in nature and culture: eulachon. These small ocean fish return to the estuary at the end of every winter and, while their lack of commercial value means little research has been undertaken, their value to the area’s First Nations people is immeasurable. To this day eulachon are an important part of indigenous communities’ diets. 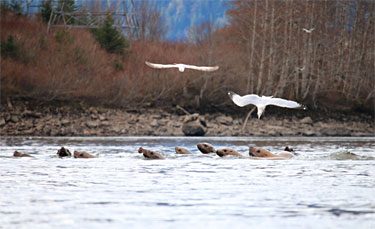 The eulachon run attracts other species like sea lions and gulls to the Skeena River to feed. Photo credit: Allison Paul.

“The eulachon run is one of the first signs of spring along the Skeena,” says Penny White, a fisheries biologist with NCSFNSS, which helps coordinate the monitoring efforts for the eulachon harvest. “After a long winter, eulachon were often the first fresh food available and were relied upon for their nutritional value.”

She adds, “The run this year was extremely late; we didn’t see any eulachon until March. We were worried they wouldn’t come at all but, when they arrived, life on the river exploded. It’s an amazing sight with thousands of gulls, seals and sea lions all following the fish.”

Penny talks with fishermen and elders along the river to get an estimate of the eulachon run, how much each person harvests, who they are fishing with and how long it takes fishermen to get enough fish for themselves and those they share with. 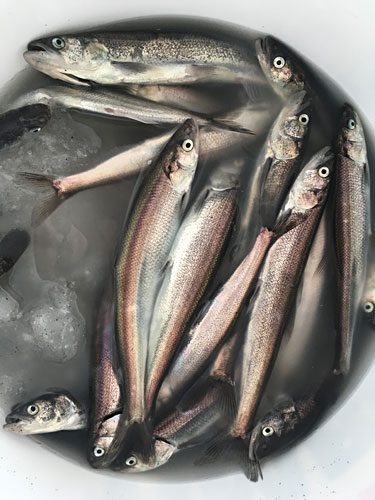 A bucket of eulachon on ice. Photo credit: Penny White.

The best way to understand the cultural, biological and economic importance of the Skeena Estuary is to get to know it. After a short visit, you may become inspired to participate in efforts to enhance stewardship of this truly unique coastal habitat to ensure future generations can enjoy all that it has to offer. 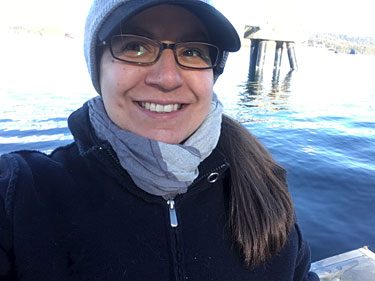